Jessica Calalang and Brian Johnson both hail from the Midwest, Calalang from the Chicago area and Johnson out of Royal Oak, Michigan. Both are students at Saddleback College in Mission Viejo, California. But sometimes, they think their off-ice similarities end there.

“Brian makes everything light-hearted, while I’m very serious when I’m in the rink,” Calalang said. “Sometimes, I need a crack of a joke here and there.”

“I have a very relaxed personality,” agreed Johnson.

As senior pairs gear up for the 2019 U.S. Figure Skating Championships in January, the field looks deep, with new teams gaining international assignments and others graduating from the junior to senior ranks.

Calalang and Johnson, who both won U.S. junior silver medals with their previous partners, threw their hats into the ring this spring when they were teamed up by coaches Todd Sand and Jenni Meno.

“We decided to skate together around the beginning of April, so it’s only been five months,” Calalang said at September’s Autumn Classic International, where the pair placed fourth in their international debut. “We’ve come a long way. We’re super-new but I think it’s coming together and we’re doing pretty well.”

“The goal is to do as many (competitions) as we can get and just train our butts off,” Johnson, a man of few words, added. True to their word, the team is competing at Tallinn Trophy in Estonia this week to add to their international experience.

Here’s what else to know about this promising new partnership:

Their differences drew them together. 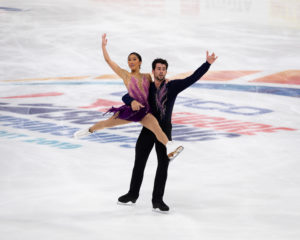 Sometimes while driving together to the rink, Johnson points out automotive details about passing vehicles while Calalang does her best to learn the difference between an Audi and a Lexus.

“I’ve worked part-time as a mechanic for a while. I love it and I do it quite a bit,” Johnson said.

“Sometimes I’ll ask, ‘Is that car made in Japan?’ and he says, ‘Yeah,’ and that’s as far as I go,'” Calalang, who works part-time in their rink’s operations area, said. “He’s telling me something about a car he’s fixing and he’s using vocabulary I don’t know.”

Once they hit the ice, though, their vocabulary clicks.

“Since we are both so different, putting us together really finds that happy balance,” Calalang said.

The 23-year-old Calalang likes having a younger partner – even if the age difference is only about eight months. 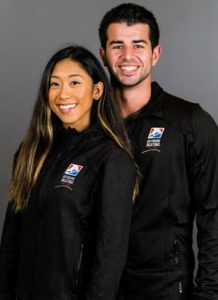 When asked what attracted her to Johnson as a partner, Calalang said, “He is young, he’s 22. When we tried out that first day, I felt really safe with him. I knew he was going to take care of me no matter what.”

Then she added with a laugh, “And since he is younger — he’s still a little boy — he listens to our coaches and I feel like he has a lot of room to grow as a skater.”

Johnson, long impressed with Calalang’s skating, approached Sand to set up the tryout.

“Having watched Jessica train in Aliso Viejo for years, it was really my choice,” he said. “I was looking for somebody who was super athletic, with a really good work ethic.”

Their skills match up well, except for one element. 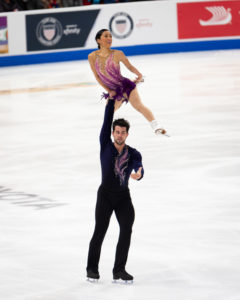 Having trained under the same coaches for many years, Calalang and Johnson share similar technique.

Their triple twist, often a big challenge for new pairs, is already high and strong, even gaining a rare +5 grade of execution (GOE) from one judge at Autumn Classic.

But when asked what element is proving the toughest, Johnson winced a bit.

“Definitely the throws,” he said. “Her timing was very different from any of my other partners’. It took me a little bit to get there, but I think we’re doing pretty well.”

In their international debut, Calalang and Johnson landed throw triple Salchow and Lutz.

They love training in Aliso Viejo. 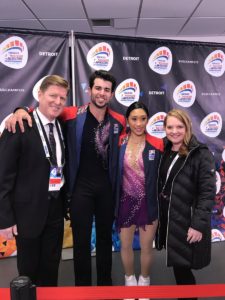 The skaters’ coaches, Jenni Meno and Todd Sand, are three-time U.S. champions and three-time World medalists who have been married since 1995. Calalang and her previous partner, Zack Sidhu, trained under Meno and Sand for eight seasons; Johnson and his prior partner, Chelsea Liu, worked with the couple for four seasons.

“I trained under a few other coaches in pairs for one or two years, so when I came to Todd and Jenni I was still new,” Calalang said. “I was a beginner, and I feel they made me into a pair skater I am.”

“I moved (to Aliso Viejo) in 2014,” Johnson, who sometimes plays a round of golf with Sand, said. “I had quite a few other pair coaches before this, I started pairs pretty young. I love Todd and Jenni, they’re great. I wouldn’t dream of leaving them.”

Rohene Ward choreographed their programs.
Their free skate is set to the contemplative, somewhat mysterious soundtrack of the 2016 film Nocturnal Animals, while their “Salsation” short program is loaded with sass.

“When (Rohene) came to us, he had ideas,” Calalang said of the short. “We were going in a certain direction that was electric guitar, and he said, ‘OK, I have this idea,’ and he played it. We looked at each other and started smiling and giggling. That was the most reaction we got out of all the music options he gave us, so that was when we knew we would skate to that.”

“We felt the music, it made us smile,” Johnson said. “We felt if it got this direction out of us, it would translate (to the audience).”

They’re in it for the long-term.
While both skaters are experienced pair competitors, they know it will take time to gel as a team.

“We have to get more comfortable skating together as one,” Calalang said. “I feel like we’re skating pairs but we’re still singles’ skaters. We have to get that connection that a lot of other teams have.”

“I personally think it usually takes a couple of years to gel, and I’m open for that,” Johnson added.

At Autumn Classic, their death spirals and lifts gained strong marks, but they faltered on their side-by-side triple jumps. They’re hoping to build on their debut scores at Tallinn Trophy prior to the U.S. Championships.

“It’s a process; you have to take baby steps,” Calalang said. “You’re not always going to fly forward all of the time, you’re going to have some setbacks. Sometimes, it’s the setbacks that help you grow as athletes and skaters.”